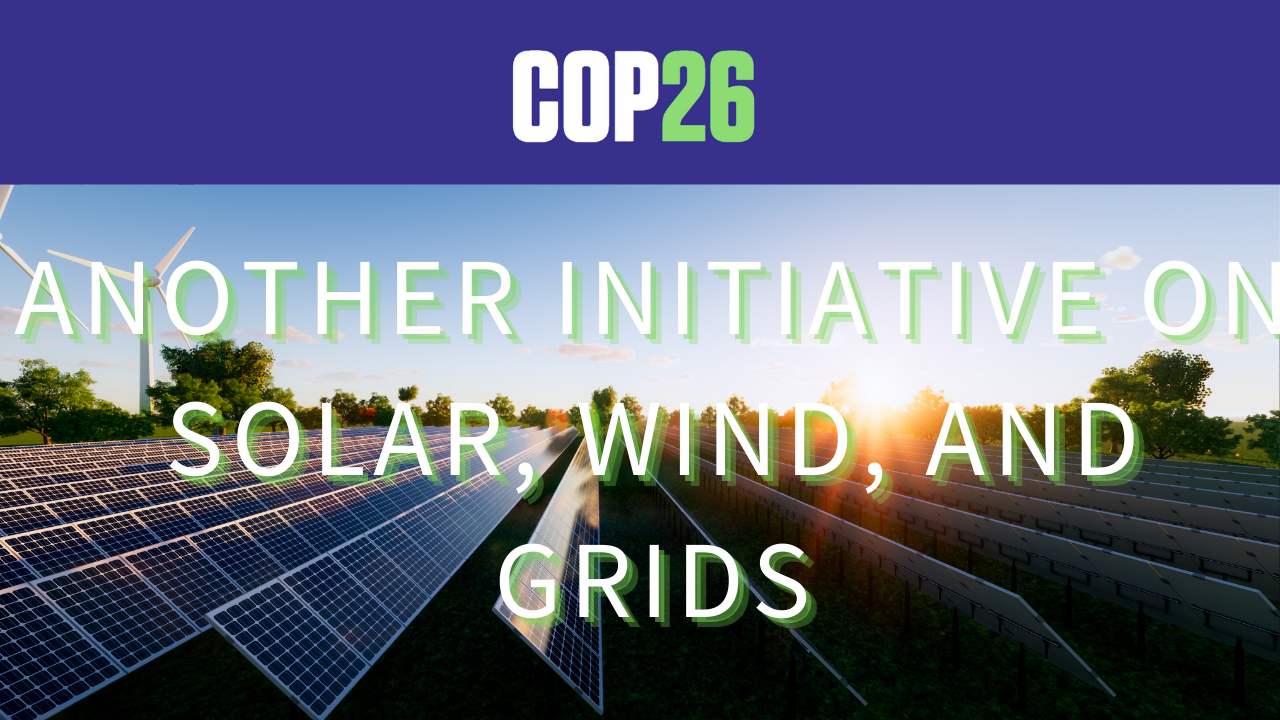 04 Nov COP26: Another initiative on Solar, Wind, and Grids

Posted at 22:32h in Analytics Report by LWAM

After our previous article discussing about US President Biden’s infrastructure bill, countries at COP26 launched another initiative that takes on a wider global scale on solar energy, wind energy, and grids, three themes at the core of LW’s investments. The United Kingdom (UK), India, the United States (US), Australia and France have linked arms to build an initiative to encourage the use of Green Grids. UK Prime Minister Boris Johnson and Indian Prime Minister Narendra Modi are among the world leaders launching the green grids initiative at COP 26 in Glasgow, Scotland[1]. The declaration was endorsed by more than 80 countries[2].

What does ‘Green Grids Initiative’ mean?

At a virtual session on accelerating clean technology, India and United Kingdom jointly launched the ‘Green Grids Initiative – One Sun One World One Grid’ (GGI-OSOWOG)’ initiative. It is aimed at accelerating the development and deployment of interconnected electricity grids globally across borders and improve energy access of the poorest through mini-grids and off-grid solutions in communities, countries, and different regions. This would be a part of the mega goal to limit global warming to 1.5 degrees Celsius. This initiative not only involves interested governments, but also regulators, financiers, institutions, companies, legislators, and researchers[3]. We think the Green Grid Initiative is a sign that the governments are trying to make a united change at a global scale, which is why we foresee massive act and adaption for solar energy, wind energy, and grid services, potentially an upside for our investments related to this.

Why is the Green Grids Initiative worth looking at? It is hope for less economic developed countries (LEDCs). Although no specific plan of this initiative has been announced yet, COP26 states that they seek to “Attract investment into solar mini-grids and off-grid systems to help vulnerable communities gain access to clean, affordable, and reliable energy without grid-access in their own areas, enhancing socio-economic development and a resilient power supply for all”. We expect that there will be more bills and policies that supplies aid towards companies to build projects in LEDCs or less developed communities. This would increase the demand for the need of solar energy and wind energy materials, also transportation towards these areas.

It aims to choose the prime locations for solar and wind energy through corporation between countries, which means that some areas will be concentrated in generating energy and some areas will obtain imported energy. Johnson and Modi said that “We need new transmission lines crossing frontiers and connecting different time zones, creating a global ecosystem of interconnected renewables that are shared for mutual benefit”. This entails that the energy would be transferred between borders, such as linked by continental-scale grids. A global scale of energy transmission would need a massive implementation of pipelines and facilities to assist this agenda. One of the goals is to seek for “cutting edge techniques and technologies to modernise power systems and support green grids which can integrate billions of rooftop solar panels, wind turbines and storage systems”.

What themes and companies could potentially benefit from ‘Green Grids Initiative’?

On an obvious note, we see how stocks related to solar energy, wind energy, and grid services would come to play. No matter if the company is at a national or regional scale, governments would create initiatives for them to act in this massive commitment. Some other themes that are included are energy storage systems, long-cross border transmission lines, and zero emission vehicles. Let’s discuss some of the global leaders for above themes mentioned in COP26’s announcement.

For solar energy equipment manufacturers, Chinese companies are in the lead for global market share. The current leaders are LONGi Green Energy Technology (601012.CH), Jinko Solar (JKS.US), Canadian Solar (CSIQ.US), and First Solar (FSLR.US)[4]. Considering that China did not endorse the initiative, First Solar is the largest American company in the leader board.

For manufacturers of wind turbines, some large names are Longyuan Power (916.HK), Vestas (VWS.DC), Siemens Gamesa (SGRE.SM), and Xinjiang Goldwind Science & Technology Co., Ltd. (2208.HK)[5]. As representatives of Europe are showing a keen stance to be involved at COP26, we expect European companies such as Vestas and Siemens Gamesa may show more involvement in such initiatives. However, we must not neglect the scale of Chinese companies like Longyuan, with a consolidated installed capacity of 24,907MW[6]. Companies with a larger production scale could be more efficient in expanding global presence and providing help towards LEDCs.

In terms of energy storage, there is NextEra Energy (NEE.US), Toshiba Corp (6502.JP), and Tesla (TSLA.US)[7]. NextEra has a large foundation for utility scale energy storage and supplying electricity in the US. Tesla may seem like an unexpected name for this list as it is known for its electric vehicles, however, its Powerwall and Powerpack batteries do have a large potential in contributing to this initiative. The technology is simply handy.

For establishing long-cross border transmission lines, there needs to be a strong energy pipeline system. Previously, we’ve introduced a company called Prysmian (PRY.IM) that has a unique business model in terms of providing energy cables. Its applications include offshore wind sites and utility power grids, which are exactly the trends addressed in this initiative.

What are the challenges of ‘Green Grids Initiatives’?

When looking at the list of endorsing countries, we must note that there are a few large powers in this initiative. India and the UK as leaders of this initiative will pay more attention to the operations and motivating other countries to support this goal. However, we noticed that a major solar producer – China did not endorse this initiative. We could interpret that Chinese local councils and corporates may not be ready to welcome such a big initiative, which is not their priority at this point of time, but we are optimistic that its global status of being the biggest producer will contribute to making solar accessible to the world.

The transmission of energy across borders requires a large amount of infrastructure and finance. Experts have pointed out that transmission across great distances can potentially be very expensive[8]. This would negatively influence the application for solar and wind energy globally. If there are insufficient funds to motivate companies to help LEDCs, we don’t think the program will be effective. According to the International Solar Alliance, they have commissioned a study the feasibility of the OSOWOG project. The study will make an assessment on a country-by-country basis, examining projected power demand and supply as well as the renewable energy resource potential[9].